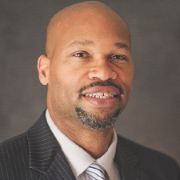 Michael Leftwich is a licensed attorney at The Timken Company where he works in the Human Resources department as a specialist focused on Associate Relations. Michael’s responsibilities include leading the development of organizational workforce compliance goals, objectives and systems, which establish metrics that support The Timken Company’s strategic goals, including diversity and inclusion. As part of his role, Michael coordinates with the company’s three employee resource groups to attract, engage, and retain diverse employees. He also oversees and implements training for supervisors/managers to mitigate litigation risks and promote a positive culture.

Michael has been a resident of Akron, OH since he began attending The University of Akron in 1995, earning both a bachelors and law degree. He has had a diverse career path including being a financial adviser for American Express, a registered broker and compliance analyst at Charles Schwab, and a staff attorney at common pleas court in Cleveland, OH. In his last seven years at The Timken Company, he has been able to combine his legal knowledge and experience with his interest for promoting organizational change to drive diversity and inclusion.

Michael is a member of several organizations including the Akron Barristers Association and Phi Beta Sigma Fraternity, Inc., where he serves as regional legal counsel. He also serves as a board member for Minority Behavioral Health Group, Inc. which focuses on providing mental health services for underserved communities.