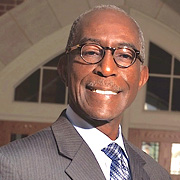 Dr. Terry Mills is the inaugural assistant provost for diversity and inclusion, and chief diversity officer at John Carroll University. In this position, he is the point person for significant long-term change efforts focusing on all diversity-related matters and efforts at all levels at John Carroll. In this capacity, Terry plays a leadership role in identifying obstacles to and solutions for successful implementation of the efforts, facilitates progress by delegating and tracking accountability measures, and developing resource and staffing plans to support these efforts.

Prior to John Carroll, Terry was at Morehouse College in Atlanta, where he served four years as dean of humanities and social sciences, and subsequently served three years as dean for research and sponsored programs. Before Morehouse, he was an administrator and sociology professor at the University of Florida (UF) where his various administrative positions included assistant dean of the graduate school, and also associate dean for minority affairs.

Terry is a 2009 recipient of the Outstanding Mentor Award from the Task Force on Minority Issues at the Gerontological Society of America; a 2005 recipient of the William R. Jones Outstanding Mentor Award from the Florida Educational Fund/McKnight Doctoral Fellows Program, as well as having been recognized for his many contributions to the Ronald E. McNair Scholars Program.

Recently, he was elected to the Board of Trustees of the Urban League of Greater Cleveland.