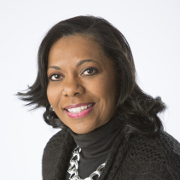 Lisa McDuffie is the President/CEO of the YWCA of Northwest Ohio and has been a part of the agency for 21 years. Mrs. McDuffie oversees a 5-million-dollar budget; 20 county service area and staff strength of near 100 employees. Lisa’s most recent accomplishment has been the startup of a new Domestic Violence Transitional house that can house 16 women. Doors opened February 2018. In 2010, Lisa orchestrated new construction, a 10-million-dollar apartment complex that houses formerly homeless women and children. Lisa, together with a 20-member board of directors, ensure the empowerment of women and the elimination of racism is addressed in all mission based YWCA programs such as the Domestic Violence Shelter; H.O.P.E. Rape Crisis Center; Youth Development Teen Pregnancy Prevention; Child Care Resource & Referral and the Healthy Connections EncorePlus breast cancer awareness programs. The agency also has a strong advocacy arm that has led the community’s efforts in March’s, voter registration and power to the polls; legislative outreach and Dialogue to Change a curriculum geared to discuss issues of Racism in America.

Mrs. McDuffie has a Masters in Science and Social Administration from Case Western Reserve University and Bachelors Degree in Social Work from Findlay College and is a Licensed Independent Social Worker with Supervision status by the state of Ohio. Lisa has been extremely active on various boards and committees such as the Governor’s Appointment to the Ohio Children’s Trust Fund Board; Promedica Board of Trustees; Chair of the Lucas County Prevention Council to End Child Abuse; President of the National Association of YWCA Executives; Treasurer of the Ohio Council of YWCA’s; Member of Lucas County Parking Authority Board; Campaign Chair of the Lucas County Domestic Violence Task Force; Metro-Parks Board Member just to name a few. Lisa is an active member of the Toledo Chapter of the LINKS, Inc.; Alpha Kappa Alpha Sorority, Incorporated; Zonta Toledo Club I and Downtown Rotary.

Mrs. McDuffie has been married to her husband George for 31 years and has two adult daughters, Victoria and Brittany.