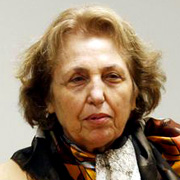 Dr. Fatima Al-Hayani has worked to build bridges between Islam and the larger community since arriving from Lebanon in 1962. She has been a Professor of Near Eastern and Islamic Studies at the University of Michigan and University of Toledo. In addition she is a member of the the Islamic Center of Greater Toledo, and is a lecturer on Muslim Women and Muslim Family Law. She is an original member of STOP, working to stop human trafficking by providing workshops to educate the public and teachers about human trafficking in the area.