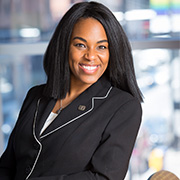 As Assistant Vice President and Sr. Public Relations Manager at Fifth Third Bank, Mrs. Jones provides strategic corporate communications support and corporate communications plans for areas of the Bank including but not limited to: Corporate Social Responsibility, Community and Economic Development (including Lives Improved through Financial Empowerment (L.I.F.E.) programming and National Partnerships), Diversity and Inclusion (including Supplier Diversity), the Historically Black Colleges and Universities Human Capital recruitment team, the Fifth Third Bank Foundation and the Community Development Corporation. She also writes press releases, media advisories and communications materials for the aforementioned areas and for activities and announcements pertaining to the $30 billion community commitment.

Mrs. Jones is very involved in the community and she enjoys giving back. She has served as a mentor for high school girls and college students, a Girl Scout troop leader, a tutor for elementary school students and in leadership roles with the African American Professional Advisory Council at Cincinnati Children’s.

She has been recognized with many honors including but not limited to: Cincinnati’s 20 leaders under 30, Venue Magazine’s 30 under 30, a 2016 Business Courier Forty under 40 leader, a YWCA Rising Star, the Cincinnati Chapter of the Public Relations Society of America’s Rookie of the Year and Cincinnati Children’s MLK Jr. Humanitarian of the Year. She is the only student in the nation to ever receive three awards simultaneously from the national Public Relations Student Society of America.

In 2015 after the death of her infant son, she started the Angel Baby Network as a way to help families cope with the devastating effects of child loss. She has served on the StarShine Hospice board, which focuses on assisting families whose children have terminal medical diagnoses and life-limiting illnesses. And she serves on the advisory board for Cradle Cincinnati, which works to reduce infant mortality.

Mrs. Jones enjoys spending time with her family and her friends. Her favorite thing to do is to laugh and her second favorite thing to do is to smile. She is passionate about living life on purpose and seeks and enacts on ways to help others be their best. She believes that every day is a gift from God and that no matter what, there is a lesson to be learned through all of life’s experiences.