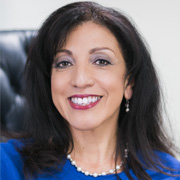 Sharlene Ramos-Chesnes is the co-founder, President and Chief Executive Officer of the InterChez, based in Stow, OH. Ramos-Chesnes has overseen the growth of InterChez from a start-up organization to an industry leader in domestic and international logistics.

She is a Kent State University graduate whose continuing education efforts reflect her dedication to excellence. Ramos Chesnes has always believed in furthering her career through education. Leadership Cleveland, Northwestern University’s Kellogg School of Management, and Dartmouth College’s Tuck Executive School are among the institutions where Ramos Chesnes has successfully completed certificate coursework.

Prior to becoming a major shareholder of InterChez, Sharlene was an educator and department head at a private school. She has held senior level positions in both the non-profit and for-profit business sectors, where she has been instrumental in the growth of the company or the expansion of services, and has carried out various initiatives in support of such escalations.

In 2016, Ramos Chesnes served as the Kent State University President’s Ambassador, where she focused on diversity and inclusion within the organization and its students. Sharlene was also awarded the Small Business Association Person of the Year for Northern Ohio. Most recently, Sharlene was inducted into the Crain’s Women of Note Class of 2017 and was honored with the Advocacy for Educational Excellence Award by the Portage County Branch of the NAACP.

Sharlene Ramos Chesnes currently serves on several boards in both the private and public sector such as the U.S. Department of Commerce International Trade Advisory Committee, the Northeast Ohio Medical University (NEOMED) Board of Trustees, the Board of Directors of the Greater Cleveland Partnership and the Summit/Medina Workforce Development Board.

Sharlene resides in Stow, Ohio. She has 3 children and 3 grandchildren.