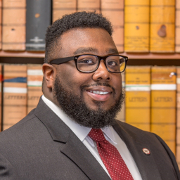 Edwin Hubbard Jr. is a Cleveland native and graduate from the Maxine Goodman Levin College of Urban Affairs at Cleveland State University. His passion for his community and commitment to giving back, led Edwin to the world of non-profit work early in his career. Since earning his Bachelor of Arts in Non-Profit Management, Edwin has spent nearly a decade serving non-profits, including (a) the Children’s Defense Fund, (b) Boy Scouts of America Greater Cleveland Council, (c) the American Heart Association in Akron, and (c) currently the Akron Urban League.

Edwin not only has a long history of serving our community, but Edwin also has a passion for improving the lives of underserved populations. Edwin currently serves on the board of directors for numerous local organizations including (a) Axess Pointe Community Health Centers, (b) 100 Black Men of Greater Cleveland, (c) The University of Akron College of Business Leadership Advisory board, and (d) Heart to Heart Communications. Edwin also serves as a member of Torchbearers and has most recently been selected as a member of Leadership Akron’s Signature Class #35.

Edwin’s wealth of nonprofit experience and unparalleled knowledge of the Northeast Ohio’s community have made him a respected and well-known non-profit champion. Edwin currently serves as the Senior Director of Funder Relations for the Akron Urban League as well as the liaison for Akron Urban League’s Young Professionals Affiliate. In these roles, Edwin has overseen the growth of the AUL YP Affiliate to more than 70 members in just 8 months and he continues to work to ensure the Urban League’s sustainability by cultivating key relationships among corporate and individual donors.

Edwin is also the proud husband of Siobhan Hubbard, father of Edwin Hubbard III and baby Hubbard (due in October).