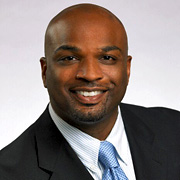 Before returning home to Columbus to lead HandsOn in 2013, Ernest served in Executive Leadership roles of several neighborhood and economic development partnerships, philanthropic organizations, and arts & cultural institutions. He served as Executive Director of Promise Neighborhoods of the Lehigh Valley, named a White House Best Practice in 2011 and President & CEO of Junior Achievement of Greater Reading & the Lehigh Valley; both in the Greater Philadelphia/Greater New York region.

Prior to leaving Ohio, Ernest applied his deep understanding of social enterprise and collective impact partnerships to lead national initiatives as CIO of the National Underground Railroad Freedom Center, and Executive-on-Loan for KnowledgeWorks Foundation. Ernest’s work at the Freedom Center recast the role of museums and cultural institutions in the 21st Century by exploring the intersection of learning, technology, and digital media. His work with the Foundation placed him as a central figure in the development and launch of The Strive Partnership. Ernest’s early work in Columbus includes serving as Director of the History Teaching Institute at The Ohio State University.

Ernest’s civic involvement includes membership in the Columbus Rotary Club, serving as Board Treasurer for the Alpha Rho Lambda Education Foundation, membership on the Board of Directors for the Center for Social Enterprise Development I CINCO, Vestry Member at Trinity Episcopal Church on Capital Square, and being Immediate Past President of the Ohio Alliance of Information & Referral Systems.

Ernest earned bachelor’s and master’s degrees at Miami University in Oxford, Ohio; and earned a master’s degree and completed doctoral coursework at The Ohio State University. His executive education includes executive certificates from Harvard Business School and The Wharton School at The University of Pennsylvania in Social Enterprise, Applied Project Management from Villanova University, and Social Impact Investing from the Tony R. Wells Foundation.
Ernest is a native of Columbus’ North Linden neighborhood, and a proud graduate of Brookhaven High School. He still resides in Columbus with his wife Kelly-Ann and daughter Madison.