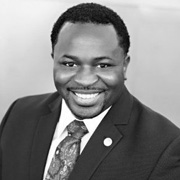 Shaun Hamilton is a native Texan and a graduate of Sam Houston State University in Huntsville, TX where he earned his B.S. Health Science. He also earned his Master of Public Health with concentration in Health Systems Management from the Boonshoft School of Medicine at Wright State University. He is a Certified Health Education Specialist. Shaun began his career with Premier Health at Miami Valley Hospital in 2005 as the Manager for the Trauma Program’s Injury Prevention Center. He was the recipient of the coveted Dayton Business Journal Health Care Hero Award in 2008 and awarded Top 40 business leaders under 40 years old at the age of 26 in 2009. In 2010 Shaun was also selected and graduated from the Dayton Chamber of Commerce Leadership Dayton program In 2011 Shaun took on the role of Manager for Supplier Diversity for Premier Health. Shaun championed several supplier diversity efforts for Premier Health and propelled Premier Health’s supplier diversity strategy from “start up” to reflect “best practices”. In 2014 Shaun was promoted to System Director of Community Health/Benefits. In this role, he is responsible for Premier Health’s Community Health Needs Assessment process and the strategic alignment of community initiatives and corporate contributions in an effort to build communities healthy.