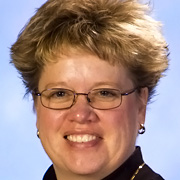 Hollie is the Vice President for the Summa Orthopaedic Institute. She is a member of Summa’s Diversity Advisory Council and Communication Chair for Summa’s LGBT Employee Resource Group APLUs (Allies and People Like Us). Prior to her current position, Hollie was the manager for Summa Center for Sports Health. She has worked at Summa for 11 years. She is a graduate of the 2012 Diversity Center of Northeast Ohio’s LeadDIVERSITY class.

She recently was inducted into the Ohio Athletic Trainers’ Association Hall of Fame.