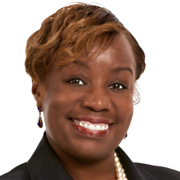 Renita Jefferson has a sixteen year history with the American Greetings Corporation. During her tenure she has held leadership roles in the Information Services Division and Human Resources, culminating in her current role as the Director of Leadership Development and Diversity & Inclusion.

In her role as Director of Leadership Development, Renita is the architect for all corporate-wide and functional lines of business Leadership Development programs as well as overseeing the corporate university, ImAGine U. American Greetings’ mission is to create Happiness, Laughter and Love and Employee Engagement is critical to the realization of this mission. As Director of Diversity & Inclusion, Renita has aligned the execution of the multi-year Diversity & Inclusion strategy to enable one of American Greetings’ key values – “We care about People and treat them with Respect”.

Renita leads the Executive Diversity & Inclusion Board which is comprised of Sr. Leadership charged with corporate-wide integration of Diversity & Inclusion key principles and strategic goals. She also leads a Forum which empowers associates to become advocates for Inclusion. In her role as Employee Resource Network leader she has grown the engagement of associate groups by 50%. She leads the Employee Resource Network Executive Sponsors in the development and implementation of the Resource Networks’ strategic goals – Recruit, Develop and Retain.