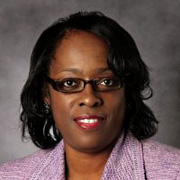 Diana Starks is an assistant vice president in the Office of Diversity and Inclusion at the Federal Reserve Bank of Cleveland. In addition to leading the Bank’s diversity and inclusion efforts, Ms Starks serves as the deputy Equal Employment Opportunity officer.

Ms. Starks has held various support, supervisory, and management positions in the operations areas of the Bank. She was appointed assistant vice president in 2003 and in that same year, she was named deputy EEO officer. In 2005, she assumed responsibility for executive support to the Bank’s president and first vice president, and in 2007, she began coordinating the Bank’s diversity and inclusion efforts. She also served as the assistant secretary to the Federal Reserve System’s Conference of First Vice Presidents in 2008 and 2009.

Ms. Starks has a bachelor’s degree in business administration from Hiram College. She holds an MA degree in psychology with a certificate of diversity management from Cleveland State University and an MA degree in organizational management from the University of Phoenix. She has also done graduate work in Christian ministries at Malone College. Ms. Starks is a graduate of the United Way Leadership Development Program and of the Bank Administration Institute’s operations and technology program. She serves on the board of the Intergenerational School and is on the Human Resource and Diversity and Inclusion Committees for Breakthrough Charter Schools.