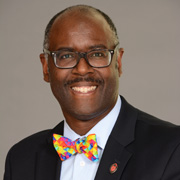 Terence Harrison is the Program Manager of Veterans Programs & Services at the University of Cincinnati. He previously served as the Assistant Director of the Veterans Upward Bound Program located at Cincinnati State

A native Cincinnatian, Terence joined the Army Reserves on 21 January 1989. He is a Sergeant First Class who currently serves with the 256th Combat Support Hospital in Columbus, Ohio where he serves as the Non-Commissioned Officer in Charge (NCOIC) of the Patient Administration Division. As an active drilling reservist, he has served the Army in the following locations: Panama, Ecuador, Germany, Guatemala and Cameroon. In addition to those locations, Terence served in Iraq in support of Operation New Dawn in 2010-2011 where he earned many awards including the Meritorious Service Medal, Iraq Campaign Medal with Campaign Star and the Good Conduct Medal.

Terence earned his Masters of Science in Criminal Justice from the University of Cincinnati and his undergraduate degree from Northern Kentucky University.