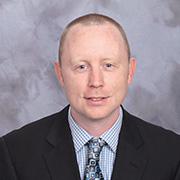 Ryan Blackburn is a native of central Ohio and an Air Force veteran. While serving on active duty from 2004-2010 as an Operations Intelligence Analyst, Ryan deployed to Iraq twice and once to Afghanistan. His first permanent duty assignment took him to Spangdahlem, Germany where he lived for two years supporting the Air Force European Command. The latter part of his military career was spent at Hill Air Force Base outside of Salt Lake City, Utah where he supported tactical level F-16 operations. He also had numerous temporary assignments including ones in Italy and Alaska.

As a Regional Workforce Consultant with the Ohio Department of Veterans Services, Ryan works directly with employers across 36 counties in central and southeast Ohio. He provides consultation and veteran employment training presentations aimed at assisting employer recruiting, human resources, and management teams in identifying best practices for recruiting, on-boarding, and retaining veteran employees. He also provides support to Veteran Employee Resources Groups and connects veteran employees to earned benefits across the state.

Ryan currently resides in Lewis Center, Ohio, with his wife, Allison, and young son, Parker. He is currently pursuing an MBA with a projected completion date in 2019.