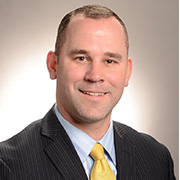 Matt Nicol is a Sr. Consultant working extensively as an account executive within some of Nationwide’s highest profile and complex partner relationships to position the company as a leader in the farm and commercial agribusiness community. Matt’s core responsibilities are to deliver profitable program and portfolio growth for the Strategic Partnerships Organization (SPO) from within the Ohio and West Virginia Farm Bureau using critical relationship management skills and business development strategies.

Matt began his professional career enlisting in the Army Reserves in 1990 as a utility helicopter crew chief. He began working at Nationwide in 1995 while simultaneously attending college full-time and serving as a helicopter pilot in the Ohio Army National Guard. During his career at Nationwide, Matt has worked in various technical and project roles within the claims and property and casualty sales organizations. In 2002, he was accepted to the U.S. Air Force pilot training program and while on extended military leave from Nationwide, would twice be deployed to Afghanistan as a C-130 Hercules pilot in support of Operation Enduring Freedom (OEF) in 2004 and 2005.

In 2006, an opportunity to own a Verizon Wireless agency operation and gain valuable entrepreneurial business experience resulted in Matt leaving Nationwide. Over a four-year period, he would open and operate eight Premium Retailer locations throughout central, southeastern Ohio and West Virginia until deciding to sell the locations and return to Nationwide in 2010. In 2013, after twenty-three years, Matt made a difficult decision to retire from the Air National Guard and his love of flying to focus on his family and career at Nationwide. Matt was elected Vice President of Nationwide’s Military Associate Resource Group in 2012 and then its’ President from 2013-2017. During this time, the Military ARG played a key role in Nationwide exceeding their five-year goal a year early in 2016 to hire 1,000 veterans. Additionally, under Matt’s leadership, the ARG has helped further many important veteran initiatives resulting in Nationwide receiving extensive recognition and awards from external military and veteran’s support organizations.