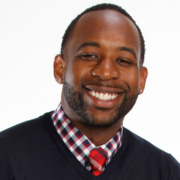 LaShaun is Director of Community Engagement at FutureReady Columbus. He leads FutureReady’s efforts in convening the community around the important educational needs for which the youth of Central Ohio are entitled. His focus with FutureReady revolves around the Early Warning Indicators (EWI) that serve as predictors of dropout risk and Social-Emotional Learning data which fuels an equity and social justice agenda across their community of partners.

In his previous role with the predecessor organization, Learn4Life Columbus, LaShaun was the Project Director for School Achievement. He directed Learn4Life’s efforts to facilitate collective impact strategies that focus on alignment and the best practices that foster students’ K-12 academic success. These inclusive efforts offered local service providers access to national best practice concepts in a local context. While the primary focus was on academic achievement and high school graduation, LaShaun also incorporated the holistic view of the child particularly the surrounding community and the role community plays in the ongoing development of children.

LaShaun was formerly the Project Director for Project ASPIRE, a teacher preparation partnership between Columbus City Schools and The Ohio State University. The focus of this partnership was to recruit, prepare, and retain underrepresented minorities (or individuals with urban education as an area of expressed interest) for teaching hard to staff subjects within the high need schools of CCS.

LaShaun routinely consults with educators, industry partners, and collective impact organizations across the country as he continues to seek innovative ways to support school aged children, particularly males of color. Notably, his recent work in convening the Columbus community around social-emotional learning strategies has resulted in his collaborating with partners across the country seeking to implement similar programs. He also serves on the national Badge Alliance research initiative and is investigating the innovative ways in which our schools, universities, out-of-school time organizations, employers, and student support agencies can credential student experiences through the innovative use of digital badging. This collaborative work has resulted in organizations in Chicago, Dallas, Los Angeles, Pittsburg, and Washington D.C. to partner with cities across the country to launch the national Cities of LRNG. This national ecosystem has the potential to revolutionize student learning and a child’s ability to “show what they know”.

LaShaun is frequently called upon to share his expertise in designing collaborative action plans that enhance partnership effectiveness, and simultaneously provide opportunities for expanded flexibility and connected learning environments for all students.

LaShaun sits on the boards of the African American Leadership Academy, the Godman Guild Association, and Talent Development Secondary. He lives in Columbus with his wife Cheree, his two daughters, Chyna (who is a sophomore at Depaul University) and 5-month old daughter LaDaia.