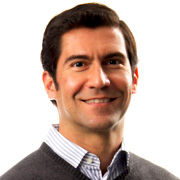 Salvador has been with Libbey Inc. for 21 years. Libbey Inc. is the number 1 glassware company in the Americas, and is one of the largest tableware suppliers in the world with exports to over 100 countries.

He currently serves as the Corporate VP and General Manager for USA and Canada, and has served in this capacity since 2015. Prior to this, Salvador served as a VP and General Manager in Monterrey, Mexico. He’s also served the VP of Sales and Marketing for Libbey, and among many other roles, and CFO for Vitro/Libbey.

Salvador received his MBA at the Instituto Panamericano de Alta Dirección de Empresas (IPADE), and an Industrial Engineering degree at the Instituto Tecnológico y de Estudios Superiores de Monterrey (ITESM). He has also studied at the Center for Creative Leadership, Colorado Springs, CO and the University of Southern California (USC).

Salvador is married with 6 daughters. The oldest attend Miami University in Ohio, and the 17 year old twins attend Ottawa Hills High School in the Toledo area. The three youngest girls attend schools in Mexico. He has 3 siblings, all of whom I’ve in Mexico, and he speaks Spanish, English, and Portuguese.

Salvador is passionate about learning what motivates people, and enjoys reading, philosophy and psychology, as well as cooking, music, nature and outdoor activities. He’s a competitive cyclist and a recreational scuba diver and skier.

His favorite quote comes from Eleanor Roosevelt: “It is unfair to ask from others what you are not willing to do yourself.”