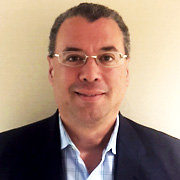 First and foremost, Jose is a dedicated, proud and committed family man. Originally from San Juan, Puerto Rico, he has been married to the love of his life and true boss, Lourdes for 20 years. They have two children: José who is a sophomore at Washington University in St. Louis, and Cecille who is in 8thgrade at Oakwood Junior High School.

His professional experience is rich and diverse, and spans over 22 years, the first part of it spent in different levels of government executive roles Puerto Rico; first as Chief Counsel for the Senate of Puerto Rico, and later as Director of the Legislative Services Office leading multiple functions including a Legal Division, Library Services, Economic Research and IT.

During the past 16 years, Jose has worked for LexisNexis in progressively larger executive leadership roles. Jose had overall strategic and business responsibility for the Puerto Rico and Caribbean Region, the Small Law Segment, the State & Local Government segment, and he now currently serves as Vice President of the Corporate Legal Segment for the North American Legal Markets. In each of those roles, José’s responsibility focused on developing and executing the Segment’s strategy, as well as working across all functional groups such as Sales, Sales Operations and Marketing to ensure sustained and continued growth.

Jose has travelled and worked around the World, including Puerto Rico, Colombia, and the Philippines. He’s a graduate of The Ohio State University for both undergraduate and Law School, and has MBA from the University of New Orleans. He is licensed to practice law in Puerto Rico and in the State of Ohio.