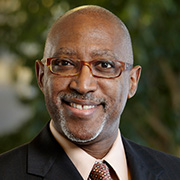 Over his 16-year career at Sinclair, Michael served as Senior Vice President, Senior Director of High School Linkages, and Director of the Fast Forward Center (a nationally recognized model in dropout recovery). In 2010, Michael was awarded NDPC’s Crystal Star Distinguished Leadership and Service Award of Excellence in Dropout Recovery, Intervention, andPrevention. A former public school teacher, administrator and coach, Michael has over 35 years of experience working with youth. Michael holds a BA from Wittenberg University and an MS in education from Wright State.