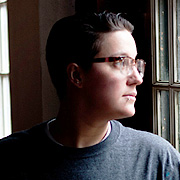 “She is able to achieve goals like nobody I’ve ever seen,” Tripepi said. “If you have an idea, you definitely want her on your side.”

That description matches pretty well with Staples’ story of Toledo’s first Pride festival, which grew out of a conversation about what the city really needed.

“I love Toledo,” she said. “But I always thought, why does Toledo not have a Pride? No one had stepped up to the plate.”

In 2010, accompanied by friends and volunteers, that crew spearheaded the first Toledo Pride event. Despite meager financials, the event attracted 2500 participants. Now with the seventh annual event approaching, Toledo Pride and its related activities are flourishing into a bright trademark for the city. “We just want to keep growing and put on a great event. Toledo is an awesome city and we promote local groups, business, artists and musicians,” she said.

Toledo has many motivating factors that help propel the Pride movement. Staples says that showcasing the localized Toledo ‘brand’ allows the area to exude a certain coolness, so visitors realize that there is a lot to do in this city. “I just love it here. We have so much food, culture, art… and people, too often, discount those things in hopes of something better,” she humbly said. Staples credits her father for her admiration of the Glass City, “My Dad [longtime Toledo radio DJ Dennis Staples] loved Toledo and that rubbed off on me for sure.”

Future goals for the Toledo Pride community include the “backing of the Pride Center 419, which has a hygiene pantry, a [fantastic] LGBTQIA library and a meeting space that can be used by several organizations.” Toledo Pride has organized a 5K run, family fun day, and established a community center, where everyone can feel safe and celebrated, regardless of their age, race or sexual orientation.

Staples works tirelessly on new programs and ways to support the local gay community and arts community. Apart from planning this year’s pride celebration, she is currently working diligently to provide kids free access to the arts.