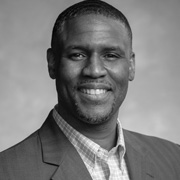 Civil Rights attorney C. Raphael Davis-Williams is co-founder of Spater & Davis-Williams, LLC, in Columbus, Ohio (www.spaterlaw.com). Prior to becoming a lawyer, he had a 14-year career as a television news reporter in Texas, Alabama, and Florida.

Raphael earned his undergraduate B.F.A. in 1992 in Radio/Television/Film from Sam Houston State University in Huntsville, Texas. Between 2004 and 2006 he completed all required course work – absent a thesis – for a Master of Liberal Arts degree with a concentration in government from Harvard University in Cambridge, Massachusetts. In 2010 Attorney Davis Williams earned his J.D. from The Ohio State University Moritz College of Law.

Raphael’s office zealously advocates for people denied housing, employment, or access to public accommodations or who experience discrimination or harassment because of race, sex, age, sexual orientation, religion, national origin, or disability. He also litigates claims for individuals whose rights are violated by law enforcement.

As a member of the ACLU of Ohio (acluohio.org) Board of Directors, Raphael serves as Deputy General Counsel and is a member of the Executive and Nominating Committees; he also currently serves on the Board of Directors of Kaleidoscope Youth Center (kycohio.org) as Immediate Past President of the Board; KYC is the only organization in the state dedicated to providing a safe, welcoming, and affirming space for Ohio’s LGBTQ* youth ages 12-20.