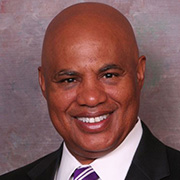 Jordan A. Miller is the regional president of Fifth Third Bank (Central Ohio), which has $2.8 billion in assets. He is responsible for the growth and strategic direction of Commercial Banking, Branch Banking, Mortgage Lending and the Private Bank. The territory includes Central Ohio, Southeast Ohio, West Virginia and Eastern Kentucky.

He started his banking career as a Bank Examiner with the Office of the Comptroller of the Currency (OCC).

Jordan received his bachelor’s degree in finance from the University of Maryland in College Park. In September 2013, he was awarded an honorary doctorate of community leadership from Franklin University.

Jordan has chaired numerous fundraising initiatives, including American Heart Association Heart Ball, March of Dimes Walk for Babies, Prevent Blindness and Ohio Foundation of Independent Colleges. He is the recipient of numerous awards and has served on several ad-hoc committees in Central Ohio.