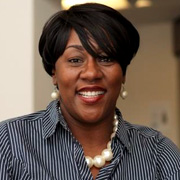 Angel Harris is the Senior Vice President and Chief Development Officer at United Way of Central Ohio. She leads the team responsible for building relationships with philanthropists at all giving levels in our community to both build pathways out of poverty for those who need support and to create a more vibrant central Ohio community for
every resident. Angel has been with United Way for 16 years.

Her honors and awards include proclamations for outstanding community service, several outstanding achievement awards, Executive Elements woman of the Week, recognition in Who’s Who in Black Columbus publications in 2005-2015 and was featured as a Who’s Who Game Changer in 2015. Angel is an honoree in the 2014 Class of Business First’s Forty Under 40.

Angel serves and has served in a variety community related positions including a trustee for the Livingston Avenue Collaborative for Community Development, a first connection volunteer for the Leukemia and Lymphoma Society, a member of the Association of Fundraising Professional’s public policy committee, recreation and parks girls basketball coach, tax preparer for the Earned Income Tax Credit Coalition, a mentor in the Big Brothers Big Sisters school-based mentoring program and coach in the Franklin University Undergraduate coaching program. She is the President of the Greater Ebenezer Cathedral of Praise Women’s Auxiliary and currently serves as Chair of the Board of Trustees for Columbus Area Integrated Health Services. She is a graduate of Leadership Columbus and Project Diversity.

A founding member of the United Way Women’s Leadership Council, Angel is also a member of Tocqueville Society, Key Club and Young Leadership Group. She serves as the African American Convener for the United Way Worldwide (UWW) Inclusion Council and is a graduate of the UWW Executive Resource Development Institute. She is an instructor, coach and mentor for new development professionals who enter the global UW system. She and her husband, Chris have a blended family with 7 children.